Every once in a while in North America, a large spider (or a spider egg sac) is found in international cargo, most commonly in bananas.  The spider is collected and taken to a local “authority” who typically has no arachnological experience. A quick search of the Internet leads the “authority” to identify the spider as a deadly armed or wandering spider of Brazil (genus Phoneutria) and then, panic and hyperbolic media coverage ensues.  However, most of the time, these incidents are misidentifications of harmless spiders.  This is due in part to the dynamic nature of being associated with a potential dangerous animal.  People like to jump to the exciting conclusion that they are dealing with a “deadly” creature.  Another contributor to the hyperbole is that a quick identification is understandably forced by a desire to know if the spider is indeed dangerous so that cargo crews will not suffer envenomations and cargo can then be unloaded before it decays (in the case of fruit).  People then err on the side of the fantastic rather than caution.

Information regarding spiders collected from bananas can be found in the two articles below, which can be obtained from me in PDF form with an email request.  rick.vetter@ucr.edu

Spiders of the genus Phoneutria cause the greatest concern. Typically, harmless spiders are misidentified as Phoneutria spiders when intercepted in cargo.  The reason for this misidentification is the well-known fact that some species of Phoneutria have red hairs on their chelicerae (the two structures below the eyes on the “face” which have fangs at the end). Unfortunately, these are not the only large spiders found in bananas that have these red hairs. Because almost no one in North America has the proper identification publications for South American spiders, they turn to either the Internet (where the spiders are often already misidentified) or the Golden Guide to Spiders, a very rudimentary identification guide. 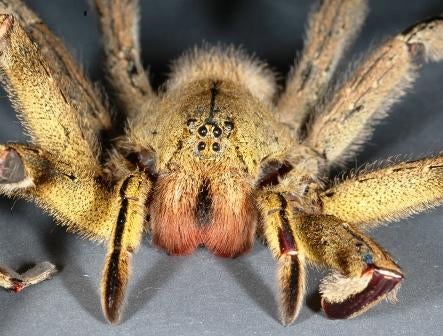 The dangers associated with these spiders for North Americans are very much overexaggerated.  First, the most cited dangerous species is Phoneutria fera.  This is actually an Amazonian species, (i.e., it lives in the Brazilian Amazon) far from areas of human commerce and the Brazilian banana plantations and, therefore, they don’t have the opportunity to be transported in cargo, or at least are highly unlikely to be so moved.  In Germany from decades ago, specimens listed as imported P. fera were most likely misidentified specimens of other Phoneutria species.  (One must also keep in mind that Phoneutria taxonomy has been a nightmare for the last century with new species being named and other names being absorbed by other existing species, back and forth almost like an Abbott and Costello comedy routine.  It is really difficult sometimes to pin down a name because for some spider groups, the taxonomy is not yet settled).  The spiders intercepted in Germany were most likely specimens of P. nigriventer and P. keyserlingi, which are only found on the Atlantic coast of Brazil and are mostly involved in Brazilian envenomations.  All three of these spiders can get up to 50 mm in body length.  However, they still are not nearly as deadly as people claim.  In one study of 422 Phoneutria bites in coastal Brazil, only 2.3% of the victims required antivenom and the only death was one small child. Although there is an obvious major concern when children are bitten, most bite victims experienced minor problems without long-lasting effects and certainly not death. Most of the bites were in adults; minor symptoms resolved without complications.

Although these large spiders were transported in bananas to Europe many years ago, currently, Brazil consumes almost all of its banana crop domestically so now there is less chance for the spiders to be transported out of the country, at least in fruit.

On the west coast of South America, another species, P. boliviensis, exists and has occasionally been transported in cargo to North America (mostly from Ecuador).  However, in comparison to its eastern relatives, this species is smaller (30 mm body length) and its envenomation effects are milder.  A paper on bites in plantation workers revealed annoying symptoms but no deaths.  Workers missed 2 to 3 days of work.  So even if these spiders were transported to North America, they are not considered very dangerous and should not cause concern.

These are the spiders that are most frequently mistaken as Phoneutria spiders.  They are large, found in banana shipments and one species, Cupiennius chiapanensis, has bright red hairs on its chelicerae.  One major contributing factor to the confusion is that C. chiapanensis was only officially described in 2006 so only a few arachnologists in Central America were aware of this spider. There are other species, C. getazi, and C. coccineus, which have sometimes been transported to North America in bananas.  The large species of Cupiennius, which are most frequently found in banana shipments in North America, live exclusively in Central America.  They have characteristic coloration: 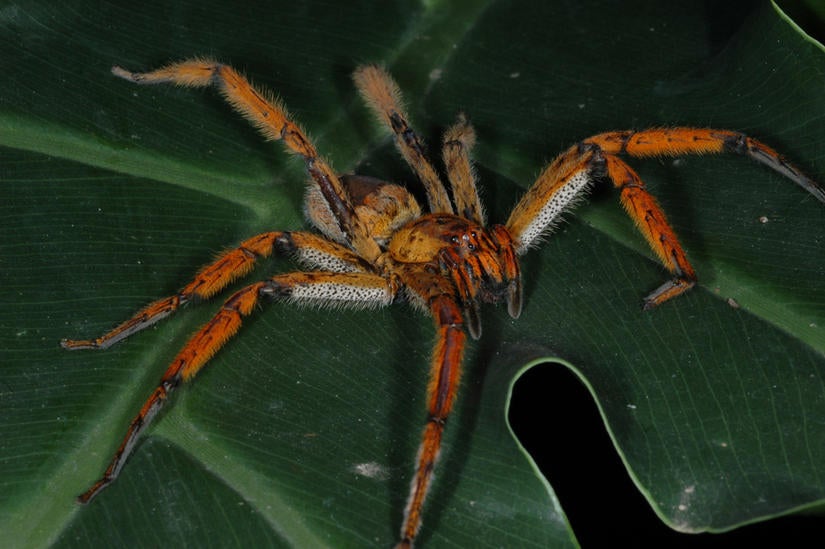 However, because C. chiapanensis has bright red hairs on the chelicerae and was only recently described, almost no sources have accurate information on this spider.  Hence, it looks closest to Phoneutria fera and then the hysteria starts.  I am aware of 6 cases where a North American arachnologist (including myself) as well as several Mexican authors made misidentifications, most of which came before 2006.  No species of Cupiennius spider is considered dangerous and verified bites result in mild pain for a short time with no long-lasting effects.

This spider is established worldwide in tropical areas including Hawaii and Florida.  It is frequently found in cargo shipments of all kinds and in bananas is common from Ecuador.  It has a white “moustache” under its eyes and holds it legs rotated to the side like a crab.  The males and females have strikingly different coloration. These spiders are harmless. 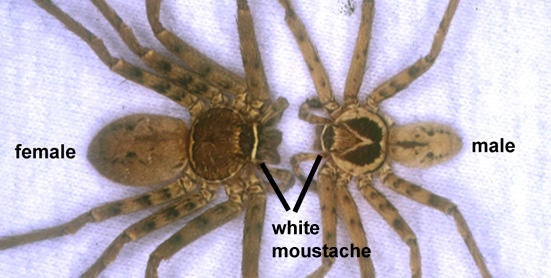 Summary for the entire page so far

In the last few years, there have been more incidences of egg sacs found on bananas brought into North America.  Most of these are crushed during shipment but on occasion a few survive transport and babies can hatch out of them, causing panic in the home owner.  And once again, people who have no arachnological training immediately identify these egg sacs as the hyperbolically-dangerous Phoneutria fera spider.  First of all, the general public is notoriously bad in identifying spiders in bananas when comparing pictures.  Considering how there is almost nothing in the scientific literature on egg sacs of these spiders, it is really amazing that people are so assured that they have correctly identified the egg sac to one species of spider.

In regard to this, I have personally seen 10 to 20 egg sacs from bananas, several with live spiderlings.  I was not successful in raising the babies; they wouldn’t eat anything that I offered them including each other and I have reared thousands of baby spiders of other species to adulthood in my career.  So people freak out because they fear that these spiders will establish in their homes, when I couldn’t get them to eat anything to get them to the next instar (stage between molts).

In addition, the egg sacs that I have been receiving have about 50 to 200 eggs inside. According to a paper in the Journal of Arachnology, Phoneutria boliviensis, (the small Phoneutria spider) lays an average of 836 eggs in its egg sac with a range of 430 to 1300 eggs.  So the egg sacs that I have been receiving are much smaller than the smallest Phoneutria egg sac.  Also, from the spiderlings that I have examined, they look closest to a small harmless spider genus, Acanthoctenus.  But because these spiders are so small and hard to identify, there is also the possibility that they are being laid by some other species that is never found in bananas so we have no idea what species it is.

But the overall message here is that the egg sacs that have been coming through in bananas do not appear to be anything dangerous and the reports of  “deadly” banana spiderlings being found by home owners is just another case of misidentification and unwarranted media hyperbole.