Have you heard this one?

"Daddy-Longlegs are one of the most poisonous spiders, but their fangs are too short to bite humans"

This tale has been lurking around for years. I have heard it repeatedly in the United States and even heard a schoolteacher misinforming her class at a museum in Brisbane, Australia. This is incorrect, but to clarify it, several points need to be explained first. 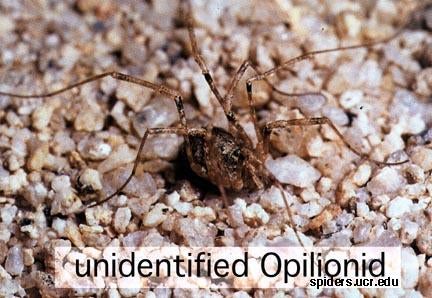 The creatures most correctly called daddy-longlegs are in their own separate Order which is Opiliones. Common names for this Order are 1) daddy-longlegs, 2) harvestmen and 3) opilionids. They are characterized by having one basic body segment which shows segmentation on the posterior portion, at most 2 eyes and all 8 legs attach to the pill-like body segment. They are usually found under logs and rocks, prefer moist habitat although they can be found in the desert, often have long flexible legs (in the temperate Northern hemisphere but there are also short-legged daddy-longlegs). They do not produce silk so therefore they are never found in webs unless they are being eaten by spiders. Because they are found under logs and other stuff which people most often are not turning over, most folks don't run into daddy-longlegs very often. 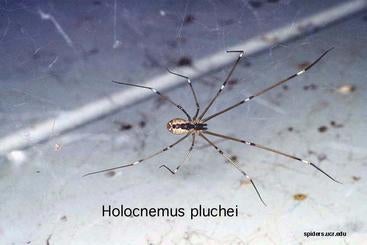 Another creature often called daddy-longlegs is actually a spider. These long-legged spiders are in the family Pholcidae. Previously the common name of this family was the cellar spiders but arachnologists have also given them the moniker of "daddy-longlegs spiders" because of the confusion generated by the general public. Because these arachnids are spiders, they have 2 body basic body parts (cephalothorax and abdomen), have 8 eyes most often clumped together in the front of the body, the abdomen shows no evidence of segmentation, have 8 legs all attached to the front most body part (the cephalothorax) and make webs out of silk. This is most probably the animal to which people refer when they tell the tale because these spiders are plentiful especially in cellars (hence their common name) and are commonly seen by the general public. The most common pholcid spiders found in U.S. homes are both European immigrants. Pholcus phalangioides is a uniformly grey spider with rectangular, elongate abdomen and is found throughout the U.S. Holocnemus pluchei also has a rectangular, elongate abdomen but has a brown stripe on the ventral side (the belly side - which is typically directed upwards since the spider hangs upside down in its web) which covers its sternum and is a stripe on the abdomen. These spiders are very common along the Pacific Coast. and into the southwest deserts.

Is there any truth to this oft-repeated tale?

Daddy-longlegs (Opiliones) - these arachnids make their living by eating decomposing vegetative and animal matter although are opportunist predators if they can get away with it. They do not have venom glands, fangs or any other mechanism for chemically subduing their food. Therefore, they do not have injectable toxins. Some have defensive secretions that might be toxic to small animals if ingested. So, for these daddy-long-legs, the tale is clearly false.

Daddy-longlegs spiders (Pholcidae) - Here, the myth is incorrect at least in making claims that have no basis in known facts. There is no reference to any pholcid spider biting a human and causing any detrimental reaction. If these spiders were indeed deadly but couldn't bite humans, then the only way we would know that they are toxic is by milking them and injecting the venom into humans. For a variety of reasons including Amnesty International and a humanitarian code of ethics, this research has never been done. Furthermore, there are no toxicological studies testing the lethality of pholcid venom on any mammalian system (this is usually done with mice). Therefore, no information is available on the likely toxic effects of their venom in humans, so the part of the myth about their being especially dangerous is just that: a myth. There is no scientific basis for the supposition that they are deadly and there is no reason to assume that it is true.

What about their fangs being too short to penetrate human skin? Pholcids do indeed have short fangs, which in arachnological terms is called "uncate" because they have a secondary tooth which meets the fang like the way the two grabbing parts of a pair of tongs come together. Brown recluse spiders similarly have uncate fang structure and they obviously are able to bite humans. There may be a difference in the musculature that houses the fang such that recluses have stronger muscles for penetration because they are hunting spiders needing to subdue wandering prey whereas pholcid spiders are able to wrap their prey and don't need as strong a musculature. So, again, the myth states as fact something about which there is no scientific basis.